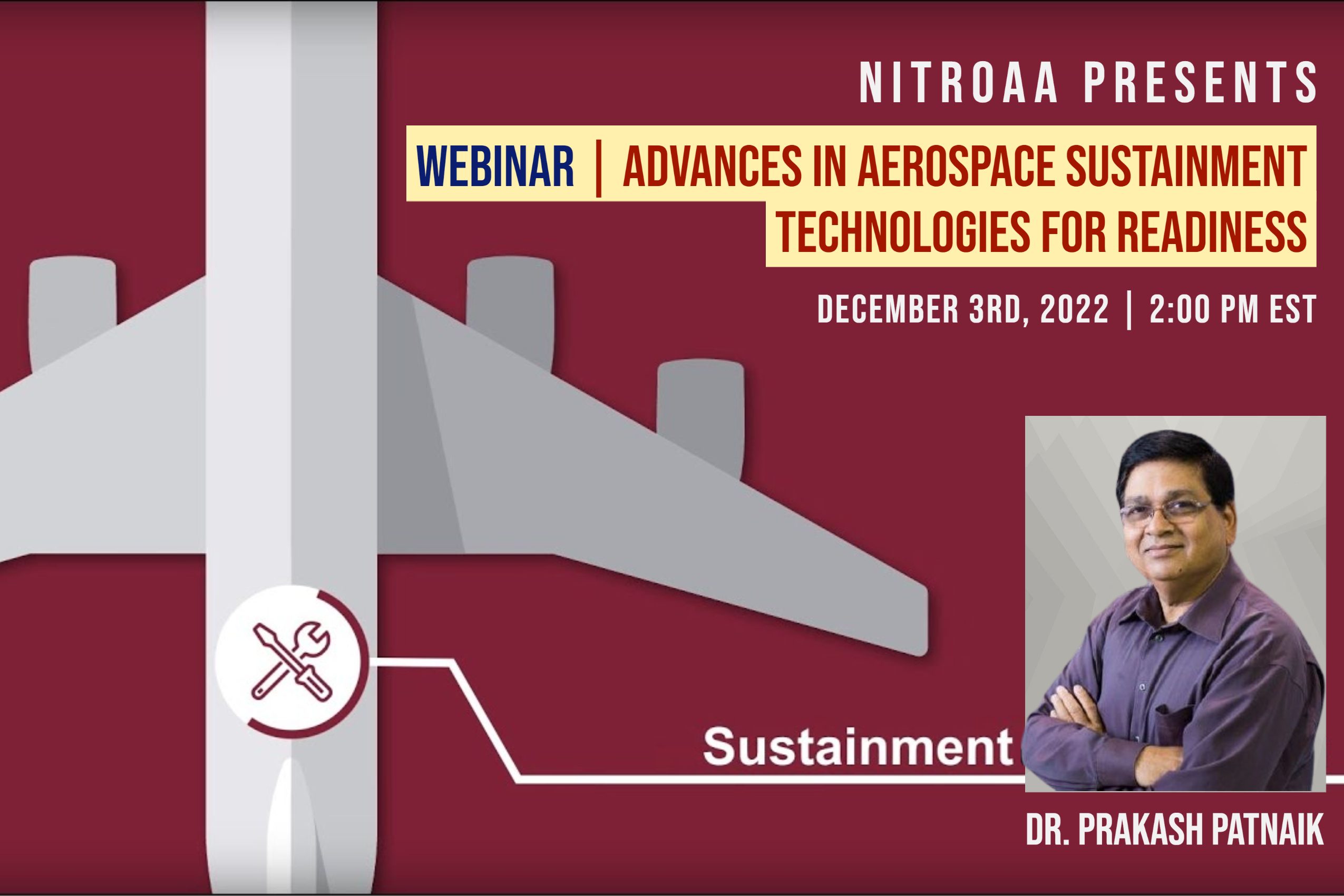 Abstract: With the acquisition of new and modernized equipment by the Royal Canadian Air Force (RCAF), maintaining existing and future fleets comes with a heavy financial and environmental burden, as well as impact on aircraft readiness levels. The Defence Technologies and Sustainment Program at NRC aims to address the required defence technologies by the RCAF to increase air platform availability, reduce the cost of RCAF operations while simultaneously minimizing their environmental footprint. This webinar will provide some insight into the Program dealing with technology development, demonstration at various technology readiness levels (TRLs) and development of airworthiness certification facilities and expertise that will help to reduce fuel burn, CO2 emissions and the life-cycle costs of ongoing RCAF operations as well as increase platform availability. Some examples such as the application of Advanced Materials, Additive Manufacturing and other concepts will be presented. Collaboration with NATO and Five Eyes nations are developed to address the above technological issues to share the burden of development.

Speaker Bio: Dr. Patnaik received his B.Eng. (Hons) degree from NIT Rourkela and M.Tech from IIT Kharagpur in India followed by a Ph.D. in Materials Science & Engineering from McMaster University in Canada. He had an impressive start to his career as a NSERC Visiting Fellow Research Scientist to the NRC’s National Aeronautical Establishment in 1984. He worked for internationally recognized defence companies such as Hawker Siddeley Canada and the Magellan Aerospace Corporation as a Senior Engineering/R&D Manager (1986-2001) prior to moving to NRC in 2002. In January 2002, Dr. Prakash Patnaik was appointed to NRC’s Institute of Aerospace Research as the Group Leader/Senior Research Officer of Metallic & Ceramic Materials in the Structures, Materials and Propulsion Laboratory. His contributions to Materials Science & Engineering and technologies related to aerospace sustainment and advanced manufacturing in the aerospace domain has been outstanding as reflected by his interaction with aerospace industry, government laboratories (NRC, NRCan and DND-DRDC) and the academia nationally and internationally. His technical expertise includes, Research & Development in and Advanced Engineering Materials & Structures with applications into Aerospace and Space Vehicles for Civil and Military including Advanced Manufacturing(3-D Printing), Gas Turbine Materials Technologies, Prognostics & Health management of Gas Turbines, Computational Materials Modeling from First Principles, Gas Turbine Lifing Methodologies, Surface Protection of Components from Degradation, Development of Sensing Methods for Strain, Temperature and Corrosion, Airworthiness Certification of components and Integrated Vehicle Health Management(IVHM) of Air Vehicles including sensors for extreme environments.

He became Principal Research Officer (the highest scientific rank at NRC and that of Govt of Canada) in 2005 and then in 2006 appointed as the Director of the Structures & Materials Performance Laboratory of the Institute. From 2006, he was given the leadership to lead the Air Defence S&T work at NRC and had the role of NRC Chief Scientist for DND/DRDC which he maintains till today. In 2012, he was appointed as the Leader of NRC’s Air Defence Systems Program (ADS) and working with DND, the RCAF and DRDC in the program he delivered research and technology outcomes in line with the ADS Program’s value proposition. Dr. Patnaik’s research engagement and contributions to private and public sector in Canada has led him to receive numerous recognitions and awards of which the ASM Fellow, Research Fellow Pratt Whitney Canada and Fellow of the Canadian Academy of Engineering are worthwhile to note. He has nearly 185 research publications in the open domain and has been instrumental in setting of the First Aerospace Materials Conference in Canada since 2002 (every two years) and acts as the Technical Editor. He was selected by CASI (Canadian Aeronautics and Space institute) in 2009 as the First Visiting lecturer to promote R&D between academia-industry and the research laboratories in Canada.

Dr. Patnaik is a member of many international scientific organizations and committees and has earned many awards and recognitions in between 1978 till 2022. He is a member of the NATO Science and Technology Organization (STO) and a former Chair of the NATO-STO Technical Committee on Mechanical Systems and Materials for the Applied Vehicle Technology panel and recently completed his term as the Chair of the NATO-AVT S&T Strategic Committee. In this capacity, he has developed and many S&T initiatives for collaboration at NATO on behalf of Canada’s DND, NRC and the Canadian Defence industry. In between 2014 and 2022 he has received 4 NATO-AVT Panel Excellence Awards for his outstanding contributions to the NATO S&T program of work in the Applied Vehicle Technology Panel including the highest NATO Scientific Achievement Award in 2019, the first Canadian to receive this honour.

He was appointed by the Department of National Defence –DRDC in 2017 as the Technical Advisor in Defence Materials & Defence Aerospace (Five Eyes TTCP Defence S&T Collaboration). He currently serves in the USAF/AFRL-DND-DRDC Air Senior National Representative (ASNR) Board as a technical advisor from NRC. A number of these appointments have been NRC First and/or Canada First.

On the academic side, he has been adjunct professors at UBC Vancouver, Carleton University in Ottawa and a Professor of Eminence at the Jain University in Bangalore India. He has completed serving the UBC advisory board in Materials Engineering and currently serving in the industrial advisory board of the Carleton University Mechanical & Aero as well as an advisory board member of the Defence & Security Science at McMaster University in Canada. As a Fellow of the American Society for Materials (ASM) International in the USA, he was selected to give topical lectures in India & Canada in early 2000 to promote research collaboration between these three nations.